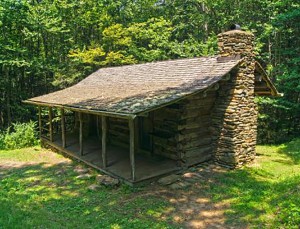 The Donley Cabin is an authentic two-room 19th century primitive and historic cabin that displays an unusually wide range of log cabin construction styles, including Swiss, German, and English. According to local sources, the fireplace room, the oldest part of the cabin, was built during the early 1860’s by a man who used the cabin as a hideout to avoid conscription during the Civil War. The cabin and lands were later bought by Jack Donley. Sometime after the Civil War, the second room was added. Today, the restored Donely Cabin is owned by the Cherokee National Forest and is available for short-term rental by those looking for a place to get away from it all.