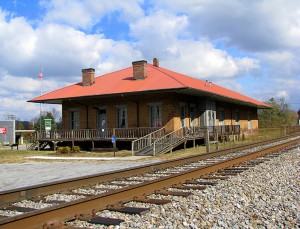 Constructed from handmade baked bricks in 1853, the Niota Depot is the oldest standing railroad depot in Tennessee.  Now used as offices for the Town of Niota, the depot is open for tours during business hours.  While inside, look for gun ports used during the Civil War.  Niota’s other claim to fame is its native son, Harry T. Burn.  Burn was serving as a Tennessee State Representative when he cast the deciding vote for Tennessee to ratify the 9th Amendment to the U.S. Constitution, giving women the right to vote.  He made the decision to honor his mother’s request in a letter that asked him to “put the rat in ratification.”  Niota is also home to the “Fried Green Tomato Festival.”