Englewood, over 100 years since incorporation, still remains relatively unaffected by the fast-paced lifestyle of the 21st century. It is situated in the southeastern corner of the State of Tennessee, about 55 miles southwest of Knoxville and 60 miles northeast of Chattanooga on Highway 411, a significant corridor between I-75 at Cartersville, Georgia, and Knoxville. According to government statistics, since the 1980s Englewood has been considered a bedroom community which implies that the majority of our citizens commute to work outside the town. The surrounding area in the 37329 zip code is primarily a farming community.

In the early 1800s Elisha and Susanna Brient moved to McMInn County after purchasing from the Dixon family the 230-acre farm called Hickory Flat near what is now Englewood. John J. Dixon, who had already built a furniture factory and grist mill, founded the Eureka Cotton Mill. Shortly after, Elisha and his son Jacob joined John. The three sons, Jacob, James, and Mortimer were instrumental in developing the industrial community. A dam built on Chestuee Creek furnished the power needed for these businesses which included the cotton mill, a spinning mill, the grist mill, a sawmill and a machine shop. Various names were given to this area: Manilla, Eureka Mill and Mortimer, named for Mortimer Brient, who operated the first post office as early as 1885. In 1895, Nannie Chestnutt, Mrs. James Brient’s sister, suggested the name of Englewood for this community after she read Robin Hood. The beautiful trees in the area reminded her of the “forest of Englewood” described in the book.

In 1880, the cotton mill and spinning factory called Eureka Mill was run by waterpower.  A small motor was added in 1890. In those early days, the mill spun 78,000 pounds of cotton into cotton warp which sold to factories to be woven into carpet.  Cotton batting was also made.  Employees worked a seventy-two-hour work week.  Children began work at age 10 making 10 cents a day.  Women earned $1.90 a week, while men made $2.40 a week. The textile manufacturing industry was the one Appalachian industry which employed large numbers of women in “public work” outside of their homes. 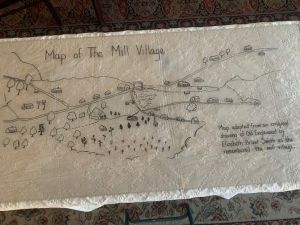 The roles of local women in the mills tell the story of the development of Englewood and may have played an important role in the Women’s Suffrage Movement. In 1919, the Susan B. Anthony Amendment was approved by both the House of Representatives and the Senate. It was sent to the states for ratification.  It had to be ratified by 3/4 of what was then the 48 states to be added to the Constitution.  Tennessee was the last state needed for ratification.  The vote was taken on August 18, 1920.  Harry Burn, from Englewood’s neighboring town Niota and the state’s youngest representative, had been on the dissenting side, which was going to cause a tie vote, until he received a letter from his mother, Phoebe Ensminger Burn.  She told him to “vote for suffrage! Don’t keep them in doubt” and “be a good boy and help Mrs. Catt (Suffrage leader Carrie Chapman Catt) to put the ‘rat’ in ratification.”  Sporting his red boutonniere which indicated he was not in support of ratification, he quickly voted “Aye” extending the right to vote to the women of America.  State lore tells how he was “chased” to the top of the State Capitol because of his change in position.  The next day before the assembly, he gave his mother credit for his change in position.  It does not take much stretch of the imagination to believe that so many working women in McMinn County caused Mrs. Burn to take such a solid stand for suffrage.

In the early days of Englewood, water was provided by wells and in the early 1900s by concrete cisterns.  By 1937, the Works Project Administration Program, one of the top 10 projects of President Franklin Roosevelt’s New Deal, provided approximately $30,000 to equip Englewood’s water wells with four-inch mains and pipes.  Fire hydrants were also installed.  Also in 1937, the Water Tower, located at what is now the intersection of Athens Street and Church Street, was built by R.D. Coe Manufacturing Company of Newnan, Georgia. An original concrete cistern is also at this site.

From 2019 to 2022, a grassroots group of citizens started the Englewood Water Tower Preservation Project. The purpose was two-fold. First was to ensure that the tower wasn’t destroyed due to the town’s lack of funding to provide maintenance for a property that had historical significance but had no needed function for the town. Second, to add to that historical significance, it was determined that application needed to be made to the National Register of Historic Places. The National Park Service placed it on the National Register in March 2021. The group was then able to make important strides in securing the funding needed to restore the tower.

In 2022, the tower was painted, and the Preservation Committee discovered that they had additional funding to do more. Through the generous donation of Cullen Smith’s daughters, Sallie Chestnutt Wright, Risher Gilbert and Elizabeth Smith, it was also possible to develop a park on the Water Tower property. The decision was made to honor their family by naming the park the Cullen Smith Memorial Park. 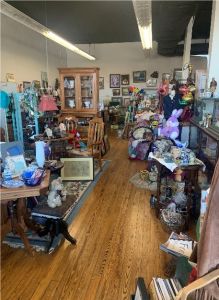 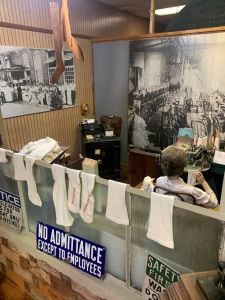 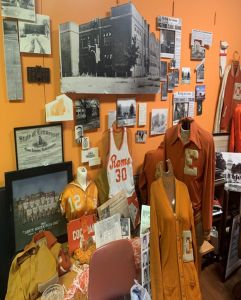 Today, our Community Action Group of Englewood better known as CAGE maintains a museum, the Englewood Textile Museum, devoted to the contributions of the women of Englewood who paved the way for women in the workforce. Sales from the Company Store help support the museum.  This is all housed in the original Company Store building and donated to CAGE by Cullen Smith, the heir to the Brient family properties.

This wonderful group of tenacious volunteers also lead the way in strengthening our community. Not only have they opened the museum, but they have several events that bring us all together throughout the year.  One of the more significant involves all the Englewood churches which are invited to gather to celebrate major holidays.  Starting at Easter, for several years, churches spent the week before Easter visiting each other’s church.  For example, the Baptist Pastor might speak at the Englewood Church of God while the Methodist choir provided the special music. This culminated with Sunrise breakfast on Easter Sunday at the Christian Church. While this activity has reduced some, we still participate together to celebrate Easter

The last weekend in June, CAGE started Englewood Celebrates festivities, which include a reunion for Englewood High School graduates, a pancake breakfast and festival on Saturday, and a combined church service on Sunday night. Again, funds from this event support the Textile Museum. 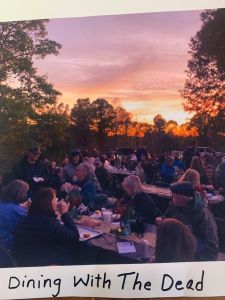 Another fund raiser in the fall, “Dining with the Dead” features supper at the Cochran Cemetery and a visit to several tombstones. At each stop, reenactors share the events about the Civil War hero buried there.

At Thanksgiving, CAGE sponsors a combined church service, which is a fund raiser for Englewood Goodwill workers who assist Englewood residents with funds to pay electric bills on an emergency basis. The Englewood Food Bank is an extension of this ministry.

The year culminates with a Christmas display on Main Street, a combined church service where each church choir shares one or two works from their Christmas music and the Christmas parade.  All these events are sponsored by CAGE. 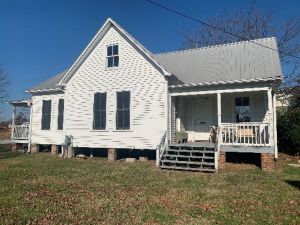 CAGE restored the Chestnutt House, Englewood’s first house located behind the museum after they secured National Register Historic status for it.

In 2017, the Tellico Railroad became part of Rails to Trails Conservancy and in 2021, the line extended from Athens to Englewood currently stopping just inside the town limits. The final plan intends for the Trail known as Eureka Trail to end in the vicinity of the old Eureka Mill and behind the Englewood Textile Museum.  It is frequently used by walkers, runners, bicycle riders and horseback riders.

Englewood…The Town and Its People. 1986. Edited by Bobbie Armstrong Dickson