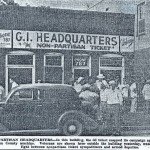 The battle was a rebellion of veterans and other citizens of McMinn County as a result of a culmination of events leading up to the August 1946 election. The G.I. Non-Partisan Ticket opposed the county leadership that was in power at the time. Election Day irregularities took place and were reported by G.I. Observers only to be ignored and G.I. Observers were arrested, beaten, and held against their will.  The issues and conflicts were not limited to Athens or McMinn County. Friction was evident throughout the surrounding counties, the state of Tennessee, and the nation in general.

The addresses given below are the present-day street addresses or physical descriptions of locations at the time of the battle. Some locations no longer exist, heavily redesigned, or another building(s) have been built in their place. The knoll is across N. White St., at a diagonal to the jail’s location. It rises approximately 13 ft. above street level and 65 feet wide. From this position they could observe the front and only about a third of the left side of the jail. The remainder of the left side of the building was obscured by a two story building. It would explain the necessity of occupying the boarding house. The house within the walled area did not exist in 1946. Operated by Otto Kennedy, Chairman of the Republican Party and a member of the Election Commission. Where a number of deputies were disarmed relatively peacefully and secured. This is where Tom Gillespie was shot. G.I. Observers Ed Vestal, “Shy” Scott, and “Gobo” Cartwright were held against their will here until Vestal and Scott made a dramatic escape while a crowd of onlookers watched.
Myth busting: It is popularly reported on various websites and some media that Mr. Gillespie was killed. He was not. Mr. Gillespie passed away on July 4, 1980 and lived to be 87 years old. 1st Voting Precinct
6 E. Madison Avenue
The courthouse burned in 1964. G.I. Observer Reed Shell, Felix Harrod and Tom Dooley were held against their will here until after the Jail was captured. Dixie Café’ 12th Voting Precinct
SW Corner of Hornsby St. and N. White St.
G.I. observers Bob Harrell, Les Dooley, Ed Self, and Carl Weeks would be held against their will here. Harrell would be beaten unconscious and evacuated. The rest would later escape.