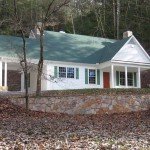 The Tellico Plains Ranger Station is a restored Civilian Conservation Corp (CCC) camp. It was the first CCC camp in the southeastern United States, and one of the first in the nation. CCC Company 1453 from Fort Oglethorpe, Georgia established the camp, constructing the Ranger Station and associated buildings. The station is in use today by the Cherokee National Forest but it has been lovingly restored to retain its 1930’s architectural integrity. A portion of the station is dedicated to displaying CCC memorabilia. The original “Ranger’s House” was recently rehabilitated and is now offered as a facility to house research workers and volunteers.