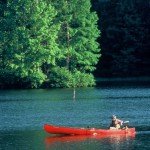 Sugarloaf Mountain Park is located just inside the Cherokee National Forest (CNF) and below the Tennessee Valley Authority (TVA) dam that creates Lake Ocoee (also called Parksville Lake). The 1,950 acre lake, entirely encompassed by the CNF, is a great for swimming.  This area is a great place to stop and picnic, enjoy nature, and learn from interpretive signs.  The park also has a model of the Olympic whitewater race course.

Situated next to the Ocoee River, at the foot of the Ocoee Dam Number One, this park includes a 1:10 scale model of the 1996 Olympic Whitewater Course that was built upstream at the Ocoee Whitewater Center.  Restrooms, picnic area, and river in-put.  423-263-0050 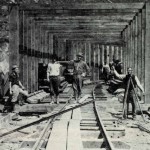 The Ocoee powerhouses, dams and flume line are part of an ambitious hydroelectric power project that began in 1910. Constructed by Eastern Tennessee Power Company, this series of historic hydroelectric structures are tucked into the narrow Ocoee River Gorge, all located within a stretch of only 12 miles.

Ocoee Dam Number One was built over the site of the old farming community of Parksville, with workers housed in what amounted to a small city. Upon its completion it was named Parksville Dam, and the new powerhouse dubbed Ocoee Powerhouse Number One. Locals referred to it as “The Big Concrete Dam,” a term that was common then but seldom used today. Ocoee Number One is the oldest dam in what is today the Tennessee Valley Authority (TVA) system. Construction of Ocoee Powerhouse Number Two, located just a few miles upriver from Powerhouse Number One, began in 1912. To provide adequate water volume to drive the turbines, a wooden flume line was constructed to carry the river waters to the powerhouse. A second dam was built upriver to hold the waters destined for the Flume. Officially named the Diversion Dam, old-timers still refer to it as “The Stick Dam.”

The Ocoee Flume is a unique structure, the only one of its kind in the nation. Constructed of tongue-and-groove California longleaf pine, it resembles a wooden trough snaking along the rock bluffs that line the Ocoee River. Its purpose is to capture the Ocoee River as it pauses at the Diversion Dam, and then force the waters through the narrow flume to the powerhouse to turn the turbines. In 1939 Tennessee Valley Authority (TVA) purchased the powerhouses, dams, and flume line. In 1941 TVA began construction of Powerhouse Number 3 to serve increased power demands during World War II.