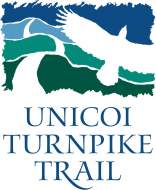 The route over the Southern Appalachians known as the Unicoi Turnpike was used as an artery of trade and warfare before written history. The old path extended from the Overhill Cherokee settlements in eastern Tennessee to the coastal ports at Savannah and Charleston. In 1999, as an outgrowth of the Blue Ridge Initiative and the Cherokee Heritage Trails Project, the section of the old path that runs from Vonore, Tennessee to Murphy, North Carolina was designated a National Millennium Flagship Trail by the White House Millennium Council. Since then, organizations, government agencies, and private citizens have worked to study, preserve, interpret, and promote the trail. The Tennessee Overhill Heritage Association conducted historical research, produced a trail guide, installed highway markers, published a book about the history of the Unicoi Turnpike Trail, and created an online trail guide, TOHA recently produced visitor orientation signs to be placed at strategic points along the trail.