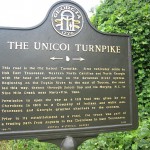 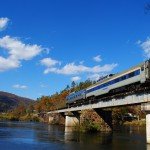 Shortly after the line was completed in 1890, the Knoxville Southern Railway merged with the Marietta and North Georgia Railway (M&NG) and took M&NG as its name. The following year the M&NG passed into receivership, was reorganized, and became part of the Atlantic, Knoxville, and Northern Railroad Construction Company (AK&N). Two very distinctive features were built as part of the line. One was a section of line located in Georgia, between Talking Rock and Jasper. With two reverse curves located within a short distance of each other, the track configuration resembled a hook. The other distinctive feature was the Hiwassee Loop, a circle of track that was built around Bald Mountain in 1898. Located in Polk County, Tennessee, the Loop looked like the eye of a needle. These two features are the reason for the line’s nickname – the “Hook and Eye.” The “Hook” was paved over when Highway 515 was built in Georgia. Today, the “Eye” is more commonly known as “the Loop.”  Listed on the National Register of Historic Places, the Loop is intact and continues to intrigue passengers who ride the Hiwassee River Rail Adventure.  Vintage passenger trains carry people along the Hiwassee River, into the rugged Hiwassee Gorge, and on to the copper mining town of Copperhill.

In 1902 the Louisville and Nashville (L&N) Railroad took ownership of the Old Line when it secured a majority interest in the AK&N. The designation “Old Line” came about in 1906, a few years after the L&N acquired the line. Improvements had been made to the line, the most notable being the Hiwassee Loop in 1898, but the L&N remained fearful that Southern Railroad, with a more direct route to Atlanta, would dominate the formidable Cincinnati market. The rail company decided to avoid the rugged mountain route altogether by building 80 miles of new track from a point near Etowah, Tennessee to Marietta, Georgia. The new line, which parallels U.S. Highway 411 in Tennessee and Georgia, ran over flatter terrain and allowed trains to move in a faster, more efficient manner. The new line, in effect, became a bypass for the old line. The copper mines, marble quarries, and other shippers continued to generate adequate rail traffic along the old line, so both continued to operate under the L&N system. L&N railroad employees immediately begin to refer to the two lines as the “New Line” and the “Old Line.” These designations are still used today.

Part of the new line project included construction of a major rail center and a township for railroad workers. A site north of Cambria and Wetmore was purchased and the L&N civil engineers built a town, railroad shops, supporting facilities, a passenger station, and a planned community that was named Etowah.

The Old Line remained a part of the L&N system until 1982, when consolidations placed it under the ownership of Seaboard Systems. In 1987 Chessie System and Seaboard Systems merged and became CSX. Shortly after the merger, CSX sold the part of the line that runs between Copperhill and Marietta, Georgia. Today, that line is owned by the Georgia Northeastern Railway. CSX continued to own the line from Copperhill to Etowah until the sole freight — sulfuric acid –was no longer produced at Copperhill. In 2001, CSX announced its plan to abandon the track. Concerned citizens, local governments, and regional organizations formed the Old Line Railroad Coalition to save the line. In 2002, the Tennessee Overhill Heritage Association, with a loan from Glenn Springs Holdings, Inc, purchased the line. To honor its history, the name “Old Line” was retained. 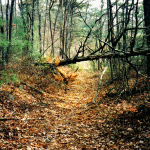 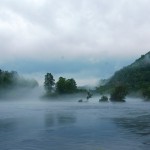 Directions – From Copperhill, TN, follow Hwy 68 North about 3 miles to Ducktown, TN. Pick up Hwy 64 West there and ride through the Ocoee River Gorge. At Parksville Lake, turn right onto Hwy 30 toward Reliance. Follow Hwy 30 (known locally as the old Greasy Creek Road) for 9 miles to Reliance, TN. Continue on Hwy 30 for around 6 miles to Hwy 411. Turn left onto Hwy 411 South to Benton, TN, or turn right onto Hwy 411 toward Etowah. Recommended Side Trip – For a side-trip up the Hiwassee River to the Apalachia Powerhouse, turn right at Reliance onto Hwy 315, cross the Hiwassee River Bridge & turn right onto Childers Creek Road .Continue for about 1 mile then turn right at Reliance Fly & Tackle (still Childers Creek Road). At the next fork stay right & continue to Apalachia Powerhouse. Return to Reliance to pick up Hwy 30 and continue 6 miles to Hwy 411.  Options – Turn left onto Hwy 411 South to Benton, TN, or turn right onto Hwy 411 toward Etowah.

Scenery – Hwy. 64 winds through the rugged Ocoee River Gorge, with curves surrounded by rock bluffs on one side & the Ocoee River on the other. Take time to look at the rock formations in the river beds and road cuts. Hwy 30 winds through Greasy Creek Community, home of the Ramp Festival & through the forest to Reliance, then follows the Hiwassee River to Hwy 411. The side trip, up the mountain to Apalachia Powerhouse, follows the Hiwassee River upstream, climbs up to Hood Mountain, overlooking the Big Bend of the Hiwassee River, and continues on to the Powerhouse. 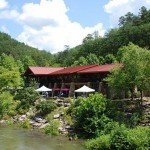 Site of the 1996 Olympic Canoe and Kayak Slalom Races, the Ocoee River hosts several whitewater events each year. Commercial river outfitters offer expert guides to help you capture the excitement of the Class III and Class IV rapids. Whitewater enthusiasts can now take guided trips on the Olympic Race Channel, located at the Ocoee Whitewater Center. Check with the Tennessee Overhill for water schedules, or contact the Ocoee-Hiwassee Ranger Station.